So as everybody hopefully knows by now, I was planning on just making emoji all this month until the holidays because I was doing a lot of stuff not related to emoji last month. This changed all of a sudden just after I released 0.0.9 because Patreon decided to do what it did (which it then U-turned a few days ago) and I had to radically adjust my schedule and scramble to deal with the emerging reality that Patreon can’t be my only source of funding anymore (at least until better alternatives come along). This meant (among other things) making my own blog so I didn’t have to rely on Patreon’s and restructuring the project website.

I really didn’t want to have to do more organisation and web stuff, but the good side to this is that I’m doing stuff I would have done later, so I’m just paying it forward. The fact that Patreon ultimately reversed their decision doesn’t really change the usefulness of what was set in motion here, even if I feel bad and like I’m letting everyone down by not giving enough emojos in the meantime.

The project’s Patreon is still the primary source of funding. And it will probably be this way for the next few months or longer until Drip comes along (more on this later).

If you left because Patreon’s proposed fee changes were prohibitively expensive, if you still can/want to donate, the coast is clear again because they’re not gonna do the ridiculous charges anymore.

There is an alternative funding option

I have made a Liberapay account as an alternative source of funding for those who would rather not use Patreon. I originally opened it because it would actually be cheaper to use for some people before Patreon decided to reverse their decision, but I still might as well keep it atm.

Because Liberapay is totally anonymous and because they don’t remit EU VAT, I can’t give rewards on Liberapay donations and I can’t put you in the supporter credits.

This is now the source for all Mutant Standard news instead of Patreon. You’ll still get Patreon posts, but they will be links to here now. I think you can subscribe to this via RSS if anyone does that these days.

I was thinking of doing a custom theme for it, but I’m not sure how long I’m going to use WordPress for, and I think this one is kinda nice anyway.

What’s happening in the next few days? 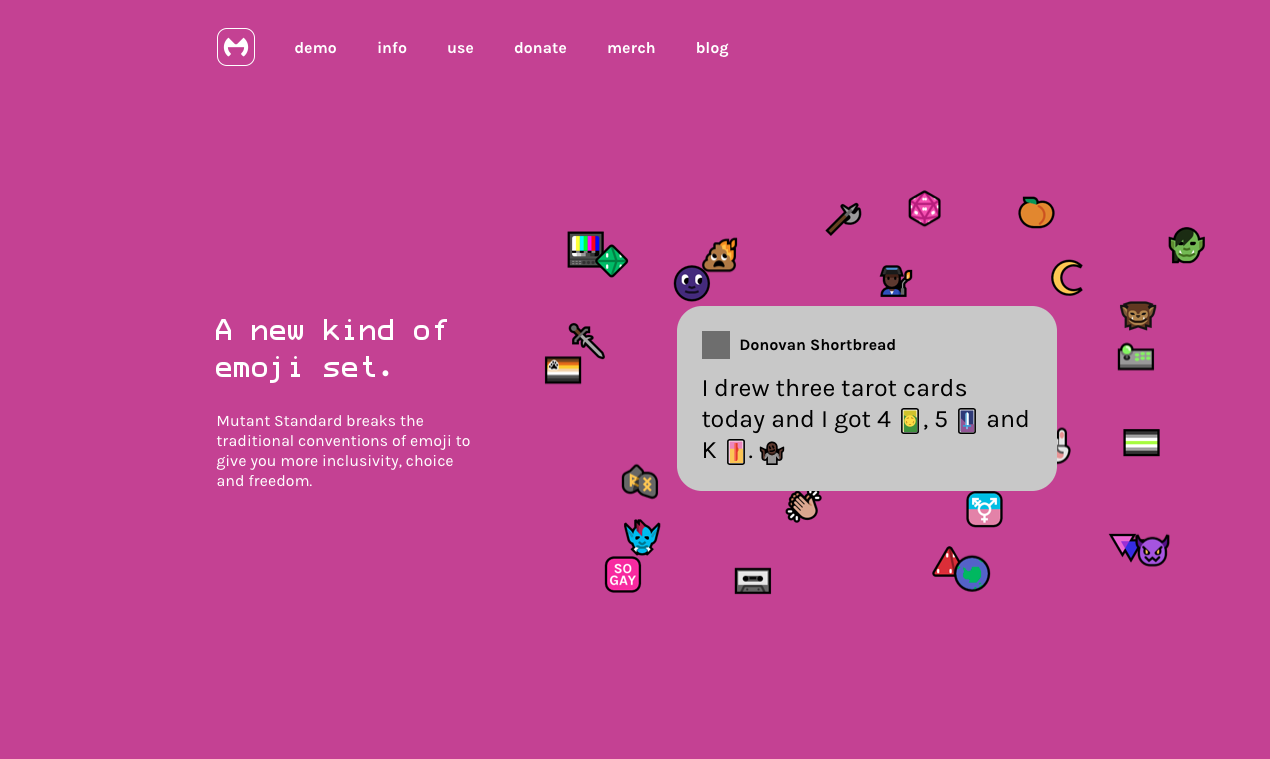 I had to restructure the site again to deal with the weight of having more new things like multiple funding sources and a blog (which this new website will have a clear link to in the menu, as you can see in the above pic). Patreon’s Goals will also be moved here because I’m now getting multiple sources of recurring funding.

I additionally made some more substantial changes to the copy and promotion based on some thoughts I had earlier this month.

I think this website is finally at the point where it can be shown to anyone and they can get the gist of what the project means, and can easily understand how to use Mutant Standard (which may not be the same as downloading it) so I’m proud of that, and I think that’s really important.

It’s also more colourful than the last version, and I think that’s important too. I like some industrial aesthetics, but it was too harsh and dull for the project I think.

Feel free to tell me what you think when I publish it!

This is something that will come with the new website. I hadn’t actually had a way of distributing these emoji because they’re intended to be a part of their own ZIP file, separate from normal Mutant Standard releases, and I never prepared the website for this. So with the new website, they will finally be available in their own ZIP file from the downloads. I’m really sorry for the delay. The Patreon bullshit started the same day I was planning to finish that stuff.

What’s happening in the future?

Like other “””creators”””, I’m eyeing Kickstarter’s Drip as an alternative and would like to move to them when their registrations are more open (which, according to them, will be early next year). I think there are legitimiate reasons to consider them an better option (or at the very least, more trustworthy) instead of a lesser evil or liable to do the same shit. It doesn’t mean ideal, but definitely better.

When this happens, I’ll let everyone know way in advance, and it shouldn’t be some awful scramble like this situation was.

I would like to thank everyone for your support during this time. The news was pretty upsetting to me for quite a while and as usual it’s been very touching to have all the support I’ve had for this project, donations or otherwise.

I look forward to giving you all more fun and interesting emoji next year! 💚