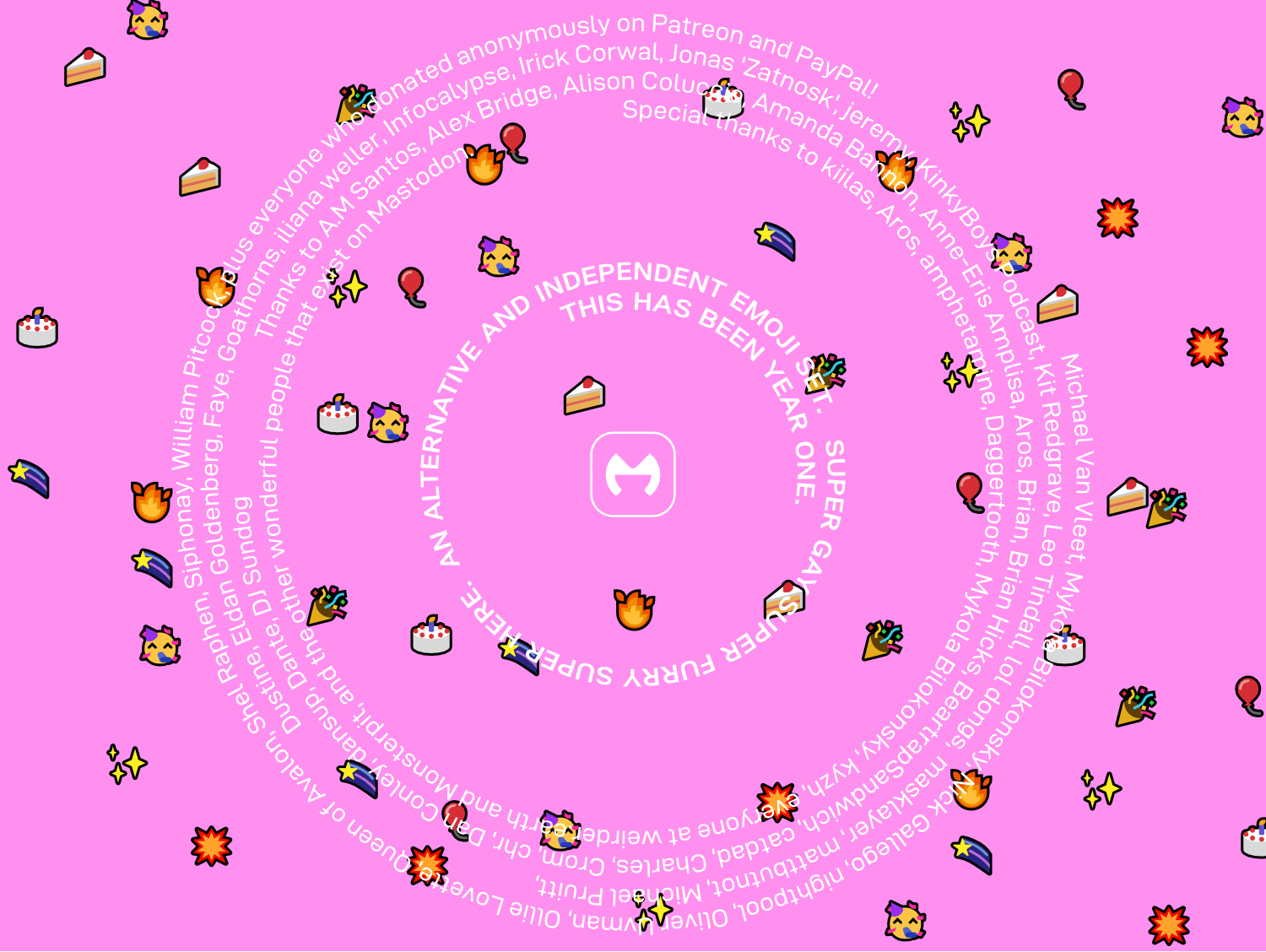 If you told me a few years ago that I’d be making emoji as this main thing in life, I would tell you to GTFO.

I was never interested in emoji when I was first exposed to them several years ago. I didn’t feel like they represented who I was at all, so I avoided them whenever possible. As the years progressed, I was dismayed by how mass culture was increasingly celebrating something that to me felt so obviously exclusionary and limiting.

Around the same time as World Emoji Day 2017, I became irritated enough with the emoji status quo that I thought ‘why not make my own emoji?’, so I started to make a few.

After posting some prototypes to Mastodon, I got an unexpectedly positive reaction – it made me realise that I was possibly onto something. So I kept making more and more emoji and getting more interest. I also started learning more about this bizarre situation that we’ve collectively been in with Unicode Standard emoji.

This emoji-making spree would quickly become what is now Mutant Standard. I can’t remember exactly when the first day I started making emoji was, but this day last year is when the first traceable file was created.

In a year, 770 individual emoji designs have been made in 15 different releases. There are many release formats for many different apps. Mutant Standard is very nearly halfway complete with this year’s Unicode Standard. I’ve made a lot of things that I said at the beginning of this project I wasn’t sure were doable.

There are still so many design challenges ahead and emoji to make, but the project has come so far already. ^∆∆^

I’m deeply touched by the support I’ve received and hearing how Mutant Standard has been enjoyed by many and how it has made many of you feel more included.

As many of you know, the past year has been one of the most difficult times in my life. This part of my life is still not over, but being a part of the really supportive communities that I found in the past year and having this opportunity to be able to make something that gives so much joy has been a real privilege.

Thank you all for your support.

I would like to give special thanks my enbyfriend kiilas for generally just being in my life, helping me become the person I am today and lending their programming expertise to this project to make Orxporter. In so many ways, this project wouldn’t be here if it wasn’t for them.

I would also like to thank many friends who have really supported me and this project from the very beginning, and to whom this project is also indebted: Aros, amphetamine, Daggertooth, Mykola Bilokonsky, kyzh, everyone at weirder.earth and Monsterpit, and the other wonderful people that exist in the fediverse and Mastodon communities.

And a last thank you to all of my patrons who have been financially supporting this project, both on Patreon and anonymously via Liberapay.

These are all of the non-anonymous patrons of the first year: