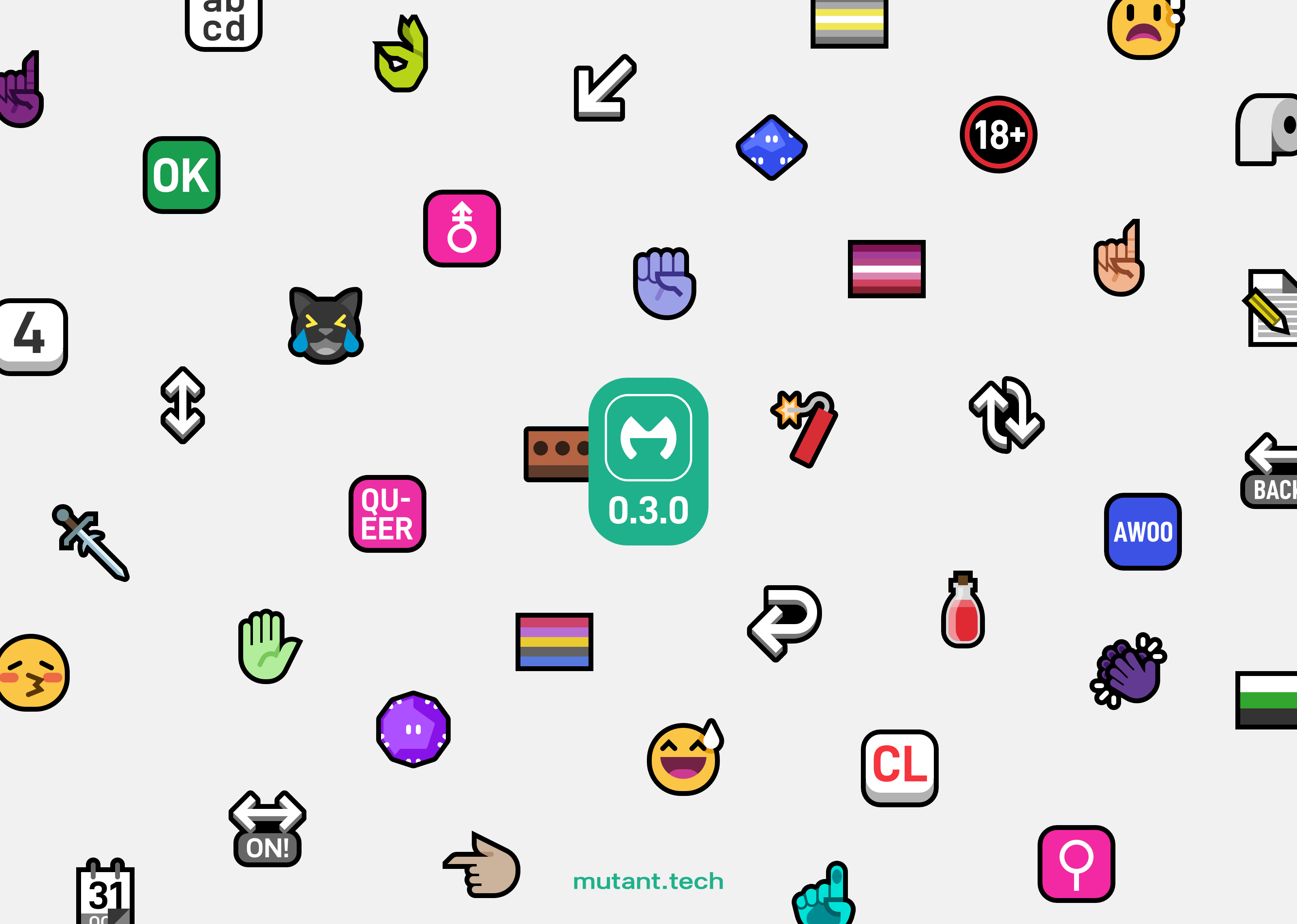 0.3.0 represents a significant step forward in getting your gay, furry and weird emoji anywhere. It also includes a much bigger (and more permanent) range of colour modifiers and many design improvements designed to improve the readability of many existing emoji.

When you type out letters or other characters on your computer, you’re not actually giving your computer a letter. What you see is the letter, what the computer sees is a number that is associated (‘encoded’) with that letter. Those numbers are called codepoints, and the system of codepoints that most people use in the world today come from Unicode.

Since Emoji came to Europe and North America via Silicon Valley, Emoji have also been encoded as codepoints by Unicode too. That’s right – according to your computer, ‘😎’ is literally the same kind of thing as ‘A’. (This doesn’t apply to custom emoji, which are made possible in various apps by inserting image files alongside text.)

Alongside specifying standards for giving different letters, characters, emoji, etc. codepoints, Unicode also designates a whole bunch of numbers as ‘Private Use Areas’ (PUA, an unfortunate abbreviation, I know), which means essentially – ‘we won’t use these numbers, go nuts’.

The Unicode Standard emoji in Mutant Standard’s set have been given proper codepoints for a while now if you’ve been downloading the codepoint packages, but what’s been missing is the emoji that doesn’t exist in the Unicode Standard. This is where the PUA comes in.

After a bunch of planning and thinking (I’ve been poking at this idea for almost a year), this release marks the beginning of emoji encoding in the PUA.

What does this mean?

Practically speaking, this doesn’t mean too much right now as there aren’t enough resources to start developing fonts (which is where you’ll really be able to use these bad boys anywhere), but this is an important step forward and is pretty symbolic. If you’re frustrated with Unicode not including a transgender flag, Mutant Standard has a codepoint for you, and it’s at U+101681.

Like with Unicode Standard encodings, Mutant Standard encodings are designed to not change. Unlike Unicode, descriptions might be improved or revised, but the core concept of that codepoint will not be changed. So the transgender flag will always be at U+101681.

Encoding is a meticulous process, so the PUA encodings in this release are a small sample of the custom emoji Mutant Standard has, but new encodings will keep slowly being added over time.

There are now way more colours for your hands and expressions (almost 3x as many as the previous version!). I hope that so many more people can now enjoy the colour options in Mutant Standard now! All of the ‘shared’ (unnatural) colour modifiers have now been set too, so they aren’t going to change, and their shortcodes will also remain the same from now on.

These particular ones have been given PUA encodings and I’ve outlined how they can technically be used as normal emoji, so they can also potentially be used anywhere.

While this does overlap with them, this may not necessarily cover all natural fur colours, which is a separate thing I will be developing later.

I’ve made a visual guide for what colour to pick if you’re a user on a server that has all of Mutant Standard’s colours. It’s included with every shortcode release.

0.3.0 is also another improvements release, where I really try to settle down the designs of a whole range of emoji. This will pave the way for me looking into making real prototypes for the much-wanted tiny stickers, and it will tie a whole bunch of loose ends up, leaving me able to aggressively pursue new emoji designs in the next few releases.

The Mutant Standard site has been updated again! It’s just a little update that reflects the new branding for the project and the homepage and a bolder mission statement.

With the new colour modifier system comes a new series of shortcodes. These are not backwards-compatible with previous versions, and some of them will overlap and clash with colour shortcodes in previous versions (and some codes are no longer used at all). With the exception of fur colours (which are still in development), these shouldn’t change anymore, so you should be okay for future releases.

The new colours mean that there are twice as many emoji as there were in the previous release, which might give you bandwidth and browser performance troubles. If you’re a Mastodon instance admin that’s going to provide all colour modifiers, consider using this script that multiple creatures made, which hides all colour modified emoji from the Mastodon emoji picker (meaning you can only access them via typing shortcodes).

I have also made a new guide to help users navigate all of these colour options. It’s licensed just like the set so you can republish it for your users – CC BY-NC-SA. You can find the guide in each package.