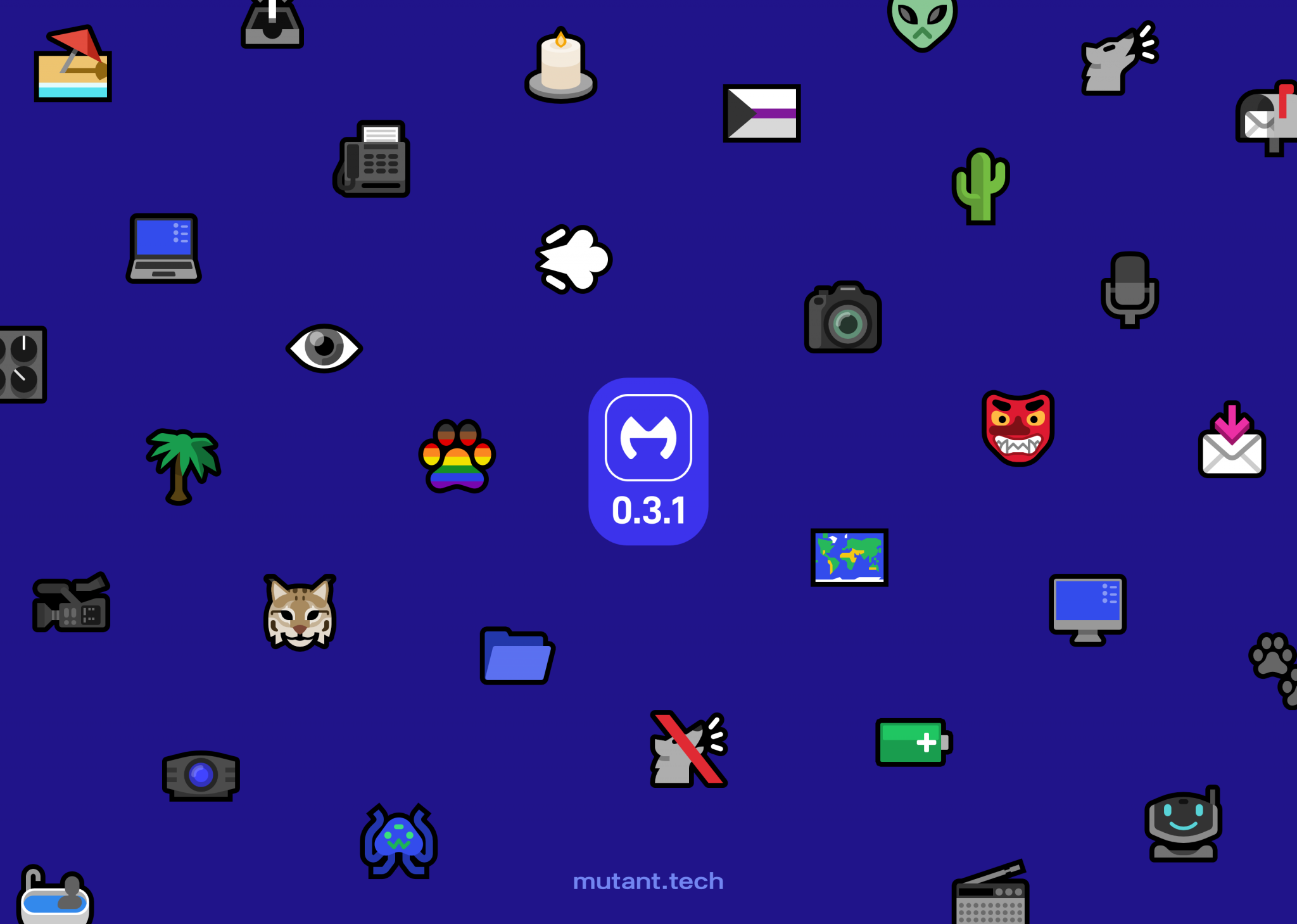 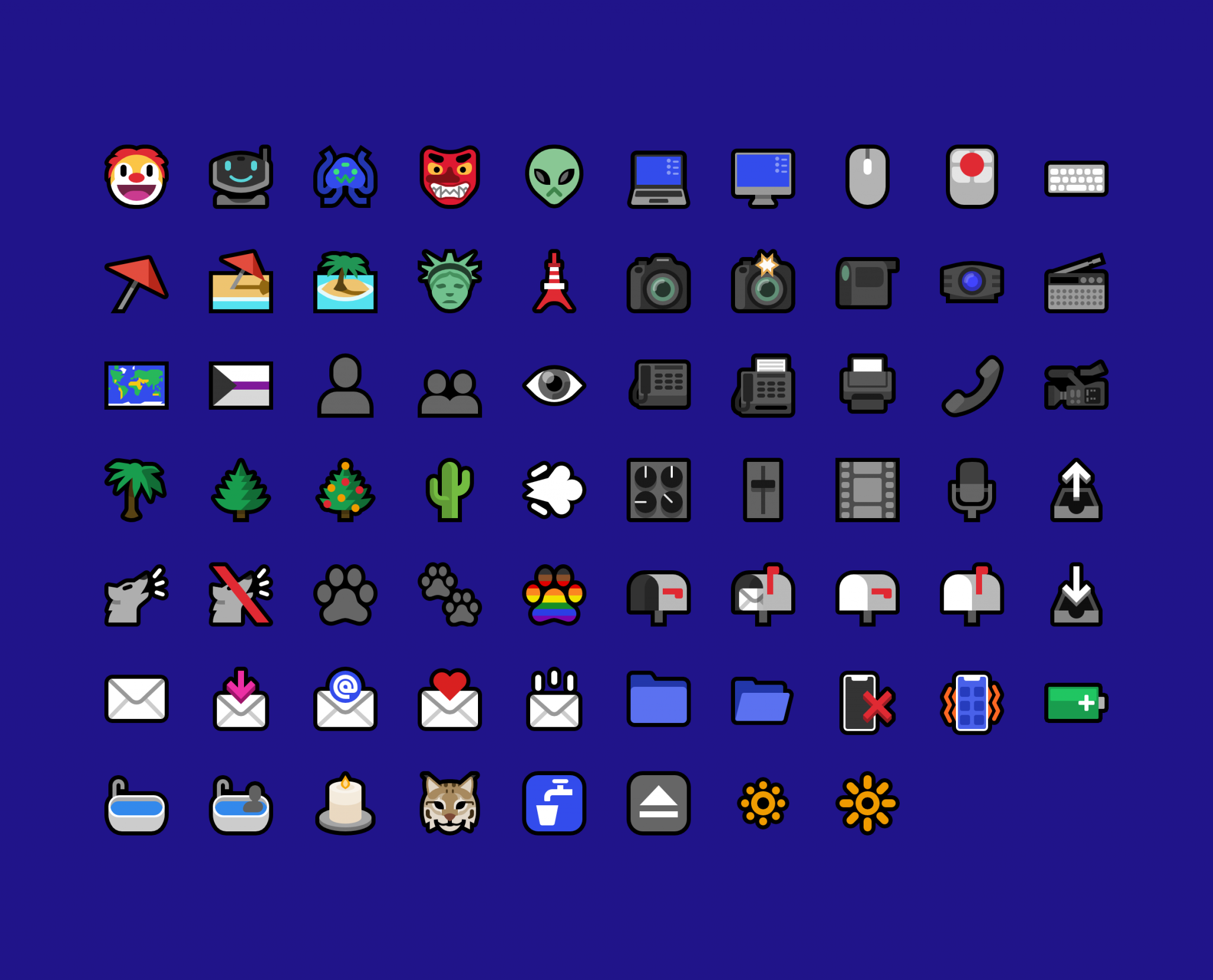 Every existing Unicode tech emoji has now been made.

Each object has been lovingly diverged from the emoji status quo. Many emoji that are normally given mid-20th century style appearances by other vendors (like movie_camera and microphone) have been given more up to date appearances in Mutant Standard.  Many devices relying on older technology (like radio and fax_machine, etc.) have been made to look more modern and more appealing too.  Silicon Valley may think many of these things are done, but in many societies or walks of life in many parts of the world, these are still a worthy part of every day life.

Awoo and Don’t Awoo have been changed from the originals to new visual symbols that don’t rely on English. There’s also new furry symbols unique to Mutant Standard – singular paw print emoji and furry pride emoji (both of these have been encoded too!).

And there’s a new Lynx emoji! (based on the Eurasian Lynx)

All emoji in this particular package have been prefixed ms_ for you (something many Mastodon admins have already been using) to avoid clashes with Mastodon’s default emoji set.

This package should be completely plug and play, but there are certain considerations you should keep in mind however if you want to use this option. Look at the Mastodon’s instructions on the use page for more details.

This is a new resolution option that’s replacing 64px. It’s ideal for old-school forum software, if you want to keep resource usage as low as possible, or wherever you aren’t using or can’t use high-DPI images.

I was originally under the assumption that the filenames for other vendors’ codepoint releases omitted key codepoints like ZWJ and VS16. I was wrong, so all of the codepoint filenames have been overhauled to contain this new information.

A whole bunch of codepoint typos have also now been fixed.

Read the Advance Dev alert I made a while back for more detailed information.

Releases will now happen every 2 months.

0.3.1 was an experiment to see if longer release cycles would be better for me from many angles (productivity, mental health, work/life balance etc.). Turns out it’s been really successful!

From now on, all mainline Mutant Standard releases will happen every 2 months. The next one – 0.3.2 – will be released towards the end of December (probably a little earlier because of the holiday season).

I really wanted to put animal emoji in this package (and I had already started work on them), but there were a lot of unexpected necessary changes to the website, reference documentation and codepoint packages.

Next, I’ll be working on Mutant Standard 0.3.2 (which will include all the animal efforts I couldn’t finish in this one), Mutant Standard S2 (which I would like to release in November), and spending some more time in looking into/planning a possible crowdfund for the small sticker sheets (as I’ve talked about and prototyped in this post)!

64px packages are no more

Because I felt it didn’t have enough use cases, I decided to retire 64px packages in favour of other sizes. In certain apps where I linked to 64px I now link to 128px instead.

Encoding documentation has been made more detailed and more accurate. The visual guidelines have also been updated to include more tips and some shifts in what I feel are best visual uses of the emoji set.